Bismillāh, waSalātu waSalāmu ‘alā Rasūlillāh.
SubhanAllah, it’s the end of the second month of the year. Just 3 months to go until Ramadhān. Have you thought about preparing yet?

As I said last month, I’ll be sharing some things I learned at the end of each month, so here’s this month’s edition.

This book isn’t a holiday read like last month’s one, I’m glad to announce. It’s a daily spiritual manual with practical advices: “Mamulaat” by Sheikh Zulfiqar Ahmad Naqshbandi. A hadith that struck me and really impacted me was, “A servant of Allah gets tired and embarrassed of asking for forgiveness, but Allah never gets tired of forgiving.”It’s a reminder that sometimes we give up on ourselves, but Allah never gives up on us.

In one of my psych classes we were discussing the question, “When do you become an adult?” We know when Islamically, but in our society a nine or ten year old is the furthest thing from adulthood. We sort of concluded that for everyone it’s different. For me personally it would be when I’m financially independent (InShaAllah). When do you think you’ll be, or became, an adult?

Something I came to realise

I was hurt to find out that someone spoke about me. I’m a believer in “What you don’t know won’t hurt you,” so I wish it didn’t come to my attention. I came to realise a tad too late that it came to me as a test. One that I didn’t exactly pass, unfortunately. (May Allah SWT forgive me and us all.  Āmīn.) It’s forced me to reflect that if I’m so hurt, what about the people that I happen to speak about, consciously or obliviously. I don’t think any of us can claim with conviction that we’re innocent of this heinous crime. ‘Cause we talk without thinking twice. We talk without comprehending the weight of our words. It is hard to speak only when necessary. It’s super hard to think before speaking. But it’s crucial when the definition of backbiting is to say something about someone that they wouldn’t like. (Reminder to myself first.)

So let’s take a firm resolve (or renew it) at this precise moment in time, to strive with every ounce of willpower we posses to avoid falling into it ever again. And if we do, to remember to make the prophetic du’a:

I quit biting my nails after about 18 years of being a nail-biter! I’m proud to say it’s been more than 21 days, Alhamdulillah. 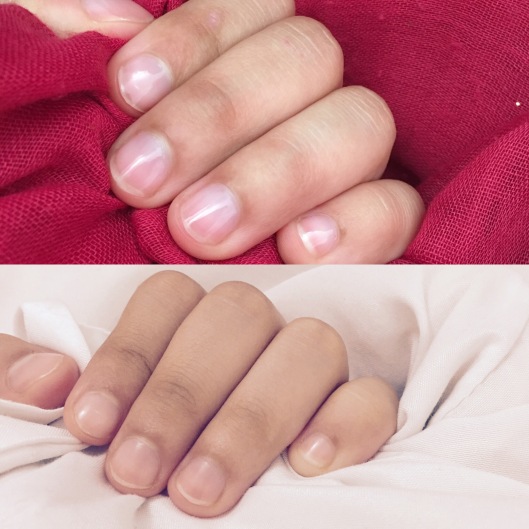 These aren’t the prettiest finger nails in the world, but they’re mine a few short weeks since I quit biting my nails after 18 years! #goalsachieved #proudofmyself

My finger nails last night. Btw I clipped them tonight!

Something I reflected upon

In psych class we learned about the cycle of friendships. It has this cool ABCDE ring to it. It may sound simple but have you actually  sat and reflected on this cycle in your life?

It made me think of my friends. Like the vast majority of people, I have many acquaintances but a handful of people that I would call friends. I reflected on why they’re my friends and whether I’d still like to be friends with them. A friend once sent me this apt quote that usually sits on my windowsill:

The biggest test in your life right now may be your ticket to Jannah. -Ml. Khalil Hendricks

The lady who gives me a lift home related to me what she heard in class at Darun-Na’im from my fave teacher. He said we should start preparing for Ramadhān now by waking up for tahajjud, fasting on Mondays and Thursdays, eating less and reciting more.

That’s it for this month’s edition. I hope you like this series of blog posts. Send me your ideas or suggestions. You can reach me any time on WhatsApp: +27793500024 (Females only).